We believe that everyone at Grace, from the girls who live in the home to the board members who assist with the home’s administration, benefits from sharing our differences.

The Grace Girls’ Home welcomes participation from students of all levels and backgrounds.

Students play an invaluable role in ensuring that proper care is delivered to the girls and elders at Grace, from participation in weekly Skype calls to on-site facilitation of projects aimed at identifying and filling potential gaps in care, management, and sustainability. It is in the nature of operations at Grace to require a multidisciplinary team of students to exercise expertise in their respective disciplines, with the hopes of finding solutions to problems to better serve the community at Grace.

Students gain not only valuable professional experience for their future careers, but also the satisfaction of taking part in a philanthropic endeavor that reaches individuals and families truly in need.

We currently have a strong partnership with the University of Michigan in Ann Arbor at the undergraduate and post-graduate levels. If you are an undergraduate or post-graduate student from any of the following disciplines, click to read more in depth about the experiences prior students have had at Grace. 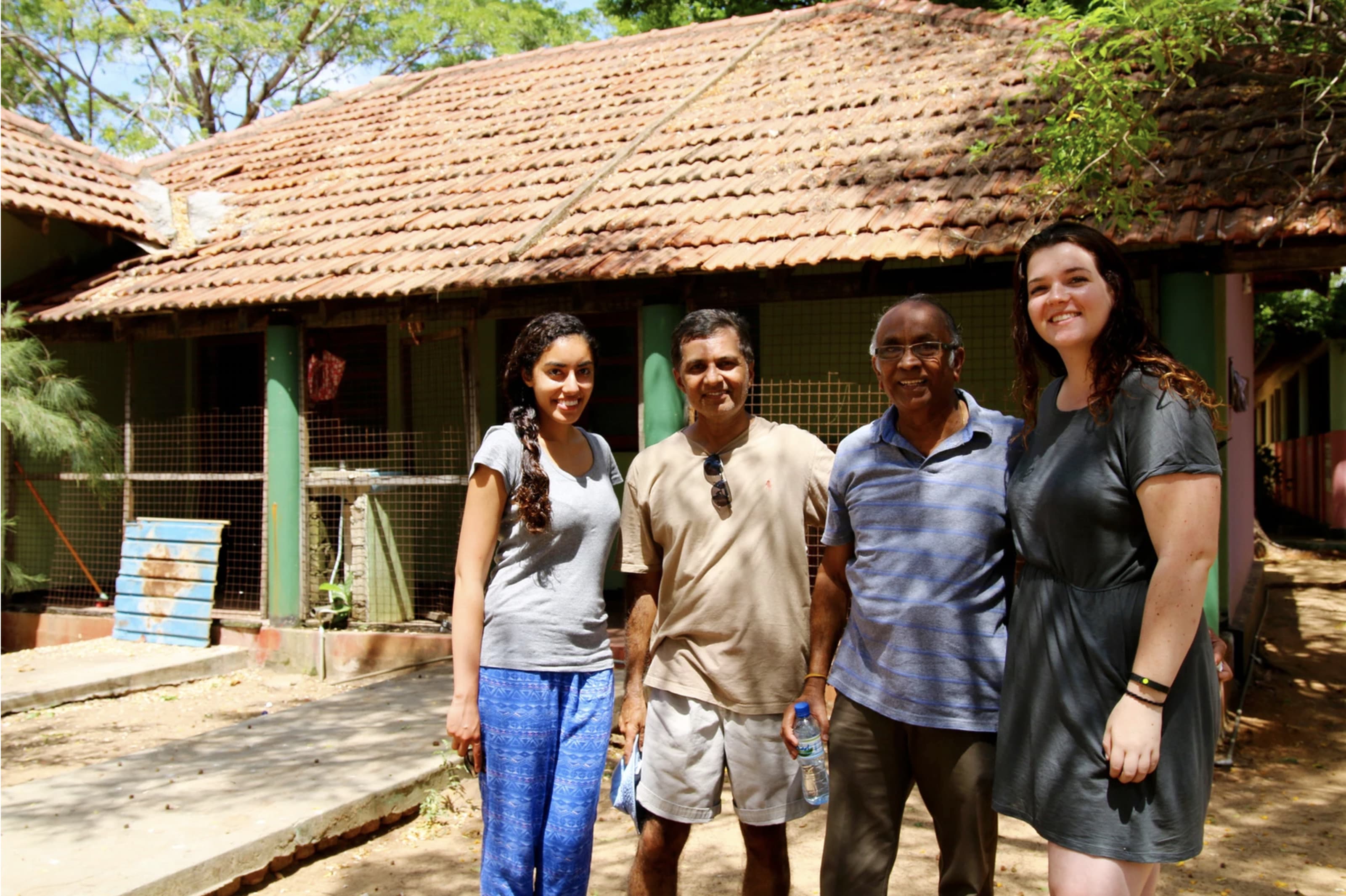 What our students are saying

"Although I have yet to visit the Grace Girls’ Home, I have made myself amenable to assisting operations through a skill-set that involves bringing people together around a common cause.

When I first became involved with Grace, I felt handicapped by my inability to relate to the other students who had made meaningful on-site contributions during their time at the center. It was then that I realized that a fundamental problem with the current student recruitment strategy was the absence of a strategy. At the time, outside of my involvement with Grace, I was building the framework to consolidate various South Asian student organizations on campus for the purposes of tackling contemporary social issues. The realization that there was a deficit in student recruitment at Grace provided clarity to one aspect of this consolidation: an umbrella student group could serve as a feeder organization for various aligned non-profit organizations, including Grace. I relayed these thoughts to Dr. Naresh Gunaratnam and he was very happy to appoint me as the primary point person for student recruitment.

Through this umbrella organization, we have engaged public health students, and now plan on engaging dental students as well to take part in an on-site training program. I have also assisted in adding a page to the Grace Girls’ Home website dedicated to involving students of all disciplines and backgrounds. The goal of a multidisciplinary approach to student recruitment will pay dividends in the future, as large problems are best solved when observed and dissected through a multidisciplinary lens. This is evidenced by the current partnership between business and medical students, striving to achieve an attainable model for sustainability.

I plan to continue my role as recruiter during the remainder of my years as an M.D., Ph.D student at the University of Michigan, and hope to visit the center during the summer to better my understanding of the mission."

Anjan Kumar Saha
MD/PhD student at the University of Michigan

"During my second month-long trip to Grace Girls’ Home, our team worked on business projects to provide more sustainable healthcare for the elders at GGH and we conducted medical work to meet the various healthcare needs (ranging from anemia, dog bites, diabetes, schizophrenia, and much more) for the GGH girls and adults. I also focused on investigating the academic struggles of the GGH girls and researched how we can assist them using educators in Ann Arbor to provide Skype-based homework help and guide the children through online resources like Khan Academy and Insight Math.

We also spent a lot of time addressing the psychosocial needs of the GGH girls, many of whom suffer from PTSD, depression, and anxiety as a result of their traumatic lives before coming to GGH. The local child counselor, Mr. Arumaithurai, who joined our team in 2014 has helped us meet the girls’ mental health needs in a more long-term fashion. I’m glad that we were able to accomplish a lot from business, medical, academic, and psychosocial standpoints during the four weeks on the ground.Most of all though, I will cherish the relationships I built. I will miss playing with the girls after school every day and sitting with the GGH elders, enjoying the sea breeze and listening to their incredible stories.

I hope that my time spent at GGH provided some meaningful benefit to the girls and elders – I know that they have left an indelible mark on me, not just in a career trajectory sense, but on a deeply personal level too."

"I arrived at Grace with the belief that one of the best ways to help children survive and thrive is to invest in their health and education. I left Grace with unforgettable memories, lifelong relationships, and a full heart. These girls represent an entire generation of young women who have unparalleled resilience, talent and potential to shape and change their communities.

It is our responsibility to help provide them with the resources and access to opportunities that will empower them to reach for their dreams. If we do so, I cannot imagine the heights to which these girls will soar."

Devika Bagchi
Rising 3rd year student at the University of Michigan enrolled in the MD/PhD program.

"The Grace Sisterhood initiative sprung from a desire to create lasting relationships with Grace girls while fostering their enthusiasm for learning.

Regular Skype sessions with our Grace “sisters” have grown into a refreshing source of anything from weekly anecdotes to storybook readings, songs, dances and so many other creative forms of expression. Working with our sisters on math and English concepts and helping them to better understand their coursework has become an incredibly meaningful experience.  We continue to integrate tutoring and other educational activities into these Skype sessions and hope to gradually build a web-based curriculum for Grace girls to access as supplemental instruction.

The Grace Sisterhood was built with the aims of easing the stress of independent study and providing our sisters with the peer support and educational resources that we receive everyday.  Working towards these goals, we have been able to experience the remarkable resilience of our Grace sisters and witness their fierce dedication to the pursuit of knowledge."

Rasika Patil
Sophomore undergraduate at the University of Michigan.

"Working in partnership with doctors and other professors at the University of Michigan, Grace has become the testing site of a new “triage” model to help categorize and treat diabetes patients in Trincomalee.

The team from the Ross School of Business visited Grace from February 26th through March 3rd and also spent the day of March 4th in the capitol of Sri Lanka, Colombo. As the ongoing team works to train the orphan girls in implementing and running the diagnostic aspect of the triage system, the 2017 Sri Lanka team was tasked with investigating the triage model further and interviewing all stakeholders regarding their views of the model, as well as, identifying suggestions for further improvements. Thus, the 2017 team spent most of its time in Trinco interviewing all of the trained technicians from the orphanage, several patients that have interacted with the technicians both at special diabetes awareness nights hosted at Grace and in a diabetes clinic at the Trinco General Hospital, along with some of the doctors that have interacted with the technicians in the clinical setting and/or assisted the technicians with their training.

In addition to the interviews, the 2017 team was able to take part in a variety of cultural activities throughout Sri Lanka. We visited some temples and had a chance to hike to the top of Sigiriya, the ancient city and World Heritage site, as well as, a chance to visit the orphan elephants of Pinnawala. The team was housed at Grace, so we were able to spend a lot of time living the day-to-day life of the orphans and elders that call Grace home. The team was able to spend an evening playing games on the beach with the girls and had fun with our surprise gift of mini water squirters. Not to mention that the team was able to enjoy many home cooked meals compliments of the girls and staff at Grace."

Fill out the form and someone from the Grace Girls' family will get back to you as soon as possible.

Your message has been submitted.
We will get back to you within 24-48 hours.
Oops! Something went wrong.